Pokémon Go is a marvel of Augmented Reality. Pokémon is the contraction of “Pocket Monsters.” This game is estimated to be on 5% of the smartphones & is expected to surpass the number of Twitter users if it continues its current growth. Pokémon GO is built on Niantic’s Real World Gaming Platform, and it uses actual locations to mesmerize players who search far and wide in the real world to discover Pokémon.

Unlike other Android mobile apps which provide services at home, Pokémon Go expects you to step outside and explore your surroundings to search for Pokémon. Whether or not you have been earlier introduced to the Pokémon world, you’ll quickly get introduced to it once you start the game. Here is the guide where you can get the Pokemon Go game apk to all mobiles.

The anime Pokémon was one of the most-watched seasons between the years 1999-2006. The game was developed by Niantic, Inc. an American software development company based in San Francisco, California. It took 20 years for creator John Hanke to improve Pokémon go. Earlier Niantic was credited to develop the idea of Google Earth. 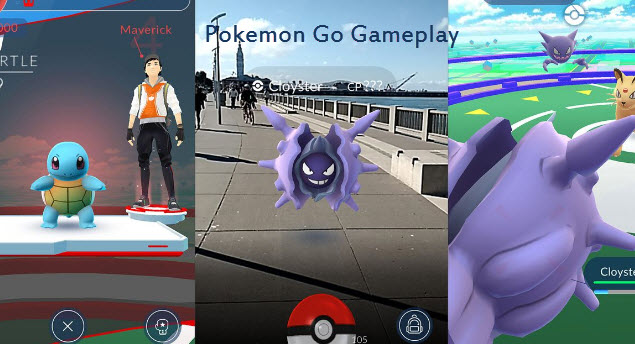 Your geographical location determines the appeal and gameplay of Pokémon Go. Near a body of water, you’ll find water Pokémon. If you go to a forest or Central Park, you’ll find grass or bug types. Each area has a specific Pokémon type, and some creatures are harder to find than others.

To begin with, you get a choice of 3 Pokémon, Bulbasaur, Charmander, or Squirtle but if you walk away from them a few times you can get Pikachu.

You catch Pokémon and complete your Pokédex by physically walking around your area. Pokémon appears near PokéStops. Visit tourist spots or malls initially to pick new ones. Once you’ve found the Pokémon, it’s time to throw a Poké Ball to try and capture it. Stronger Pokémon requires a more powerful Pokéball or Razz Berries, which lull the Pokémon to complacency.

Once you’ve got the hang of it, you can join a team and battle. A group controls certain Gyms which are defended by Pokémon. Pokémon battles are fun and challenging. Each Pokémon has two attacks, and can also dodge the defending Pokémon’s attacks if you swipe left or right.

There have been issues of server crash earlier in Pokémon Go. This is due to the unexpected fame and usage acquired by it.

There have been cases of robbery and thievery when people wander too far away in search of Pokémon.